My Watercolor Workshop with French Escapade in Belgium ended on the 12th of September and my students and I departed in various directions.  Sylvia and Bill Gude and I took the TGV train and headed south to explore Provence France. 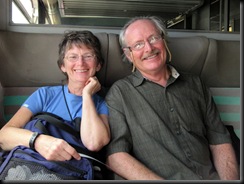 We spent the night in Avignon, then took the local train to Arles.  I was amazed at the crowded streets and cafes as we walked to our hotel, but when I heard what sounded like cheering coming from the old Roman arena I figured we had arrived during some kind of a festival.  Turns out that day, Sunday, was the third day of the fall festival of Bullgames and real Spanish Bull Fighting.  Bullgames is the French bull fighting tradition where the bull is not killed and competitors (in this case from all the local towns in Provence) each try to be the one to grab a ribbon from the horns of the bull.   Bullgames And the little city of Arles goes craazy!!!!   I shot a video with my new camera of a hilarious drunken French band jamming in a side ally restaurant, but my computer is missing the software to run it, so I can't view it or upload it to my blog.  Darn, it is probably good for a laugh.  Here are a few photos I shot around Arles that beautiful sunny day. 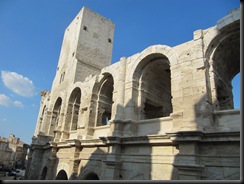 The ancient Roman arena here in Arles where the Bullgames and Spanish Bull Fight took place.  We had no tickets so could not view the games but enjoyed the celebrating outside the arena.  This arena was constructed by the Romans to entertain the people, but  no lions here, just local wild animals like bears and bores.  I find it remarkable that the same area is still used to entertain the people today. 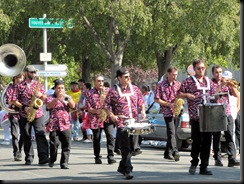 One of the bands in the parade, this one was jazzy! 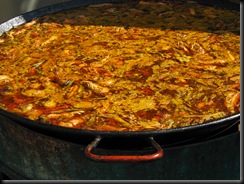 Spanish Paella was the "special" at almost all the restaurants, and vendors and shops alike were doing brisk business selling bull and bull fighting souvenirs.  Bill noticed a bull carved into the stone on an old building which showed the bull and we assume bull fighting has been popular here for a very long time. 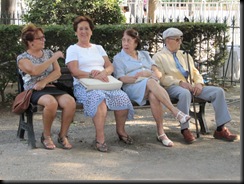 These locals wearing their Sunday church clothes, sit on their favorite bench and watch the celebrators. 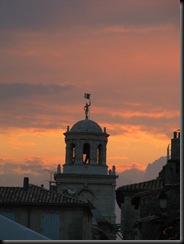 End of a fun day.

Posted by Sandy Delehanty at 1:47 AM

Sandy, as usual, your photos are amazing. Thanks for sharing. Susan Sorensen

Nice to hear from you. Sylvia and Bill and I had a great time in France, Bill took video as well as stills and is working on posting the trip on their website. Say Hi to the Art Monday group for me.