The Amalfi Coast Road was built under Spanish occupation in the eighteen hundreds (I forget the exact date) and “improved” after World War II.  It has to be the greatest challenge for bus drivers anywhere!

Huge SITA buses (the local bus system) vie with huge tour buses for space on a road not wide enough to be called two lane by any stretch of the imagination.  In addition to buses, cars (many rentals driven by tourists) and local motorbike riders and you have mayhem on wheels.

My first encounter with the road was my arrival day on a SITA bus. Lucky to find a seat, I found myself surrounded by laughing Ausies and locals who have mastered standing in the isle while holding a dog or a bag of groceries without toppling over as the bus took tight corners.  I was so enthralled by the incredible views of the coastline and the amazing bus driver that I missed my stop.  On the side of the bus where I sat I looked straight down cliffs to the sea with only a short stone wall edging the road.  On the other side the mountain went  straight up with occasional houses and shops built right up to the road.

I kept wondering what my bicycle riding friend Bill would think of the traffic on this road!  He thought drivers on the roads in Belgium were crazy, how about two buses meeting face to face and a motorbike zooming in-between!  It was impossible to photograph but here are some feeble attempts. 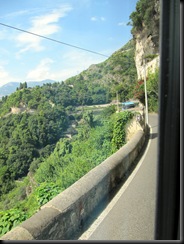 On another day in the tour bus to Pompeii, I am sitting on the drivers side so this shows what should be the lane coming the other way, accept that it is only 3 feet wide!  The driver honks at every corner.  If someone is coming they have to stop and back up until there is a space wide enough to pass.  Fold-in car mirrors must have been invented here! 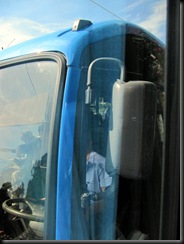 I am riding in a big shinny purple and gold tour bus to Pompeii when this big SITA bus coming the other way squeezes by but manages to scrape the bus I am on. 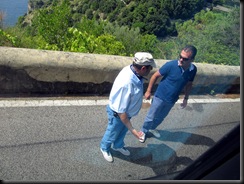 Our driver leaps out of our bus yells at the other driver who also leaps out of his bus and the two argue while traffic backs up both ways.  When I get off the bus I find a 6 inch long scrape in the pretty purple paint.

Better to look at the stunning views from the road than how narrow it is: 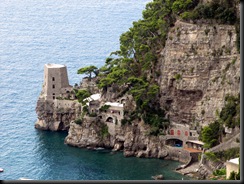 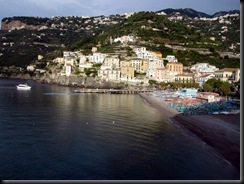 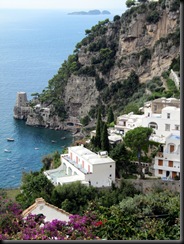 Parking is impossible to find here so the locals don’t bother with cars, they ride everything from Vespas to Honda motorcycles. 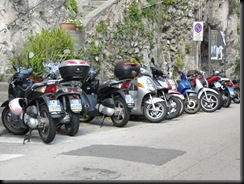 Cars and buses squeeze by these bikes on the narrow road by inches and yet the locals feel safe parking them like this. 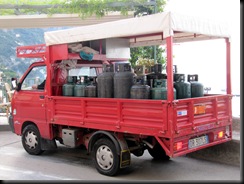 At home we have a huge propane tank for our house in the country, and a big truck comes once a month to fill it up.  I saw this little truck making the rounds in Positano every day delivering small propane tanks to everyone that needed them.

If you go to Positano, the ferry is more relaxing but you have to experience a bus ride on the Amalfi Coast Road at least once before you leave the coast.

Posted by Sandy Delehanty at 7:04 PM