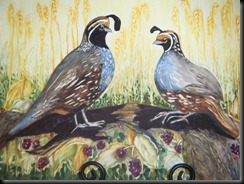 Joanie Adams began painting about 18 months ago.  When she came to my Beginner’s Workshop she described herself as being “very good at making brown”.  She worked hard in that workshop, and even took it again a few months later to make sure she “got it”.  Since then she has taken a class here and there from local teachers including me.  But what makes Joanie a successful painter so soon is she practices.

I am proud of you Joanie, and I hope this story is inspiring to others out there trying to learn to paint watercolors.  Put the miles on the brush….that is the key!

Posted by Sandy Delehanty at 8:24 PM